Have you ever Wondered Why.... – Funky Casinos
16653
post-template-default,single,single-post,postid-16653,single-format-standard,ajax_fade,page_not_loaded,,qode_grid_1300,side_area_uncovered_from_content,footer_responsive_adv,qode-child-theme-ver-1.0.0,qode-theme-ver-10.1.1,wpb-js-composer js-comp-ver-6.7.0,vc_responsive

Have you ever Wondered Why…. 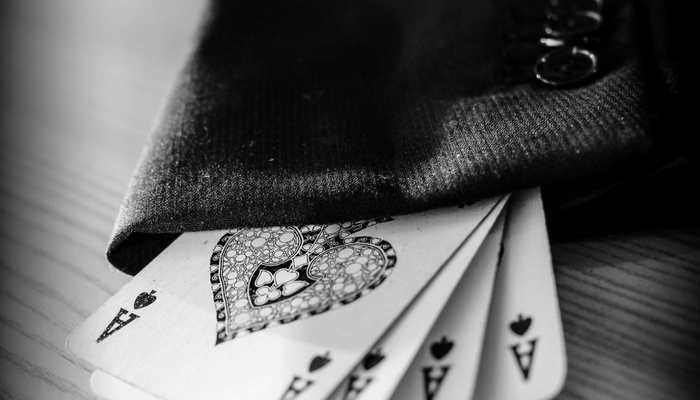 12 Sep Have you ever Wondered Why….

Posted at 16:44h in Business by Admin 0 Comments
2 Likes
Share

……The Ace of Spades is so distinctly different?

The Ace of Spades is traditionally the highest card in a deck of playing cards, in general.

It has a very interesting history.

Also known as the “death card” in many countries, it was allegedly used by opposing warring soldiers to demoralise the opposition.

Often it was strewn over the battlefields to frighten the enemy and left as a calling card on the bodies of the fallen soldiers. Many wore it tucked into their metal helmets as a sign of power and it has since been immortalised through images as above and through musical lyrics.

But why is the design so different from the other aces in the pack?

The ornate design we see today on many packs actually stems from the 17th century when James 1 and later Queen Anne imposed laws requiring the Ace of Spades to bear an insignia of the printing house. Stamp duty, an idea imported to England by Charles 1 was extended to playing cards in 1711 by Queen Anne and lasted to 1960!!

But how did they show that the duty had been paid? – Various methods were used from 1712 onwards, including marking the Ace of Spades with a hand stamp. In 1765 this method was superseded by printing an official Ace of Spades by the Stamp office, incorporating the royal coat of arms. In 1828 the Duty Ace of Spades ( known as”Old Fizzle”) was used to indicate the reduced duty of a shilling had been paid.

More changes came in 1862 when an official threepenny duty wrapper was introduced allowing the makers to use whatever design they wanted for the Ace. Most kept the ornate design we are accustomed to today and is used to show the manufacturer’s information ( as seen in the top image) .

Even today, the Ace of Spades is held in high regard – the manufacturers use the highest ranking card to display their ornate designs and information and the Ace of Spades has become the most selected playing card as a collectors item because of this.

Next time you play …take a look 🙂

If you are interested in a fun casino hire in London and the South East at any venue large or small, then contact me on 07798 904 508 or fill out the enquiry form on the website here